Andrew Stunell MP joined the Federation of Small Businesses in Parliament this week to back their new ‘ibacksmallbusiness’ campaign at the launch of the FSB’s Business Manifesto. 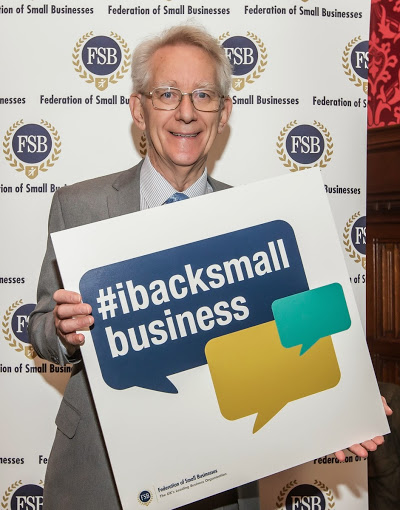 “The FSB has set out the stall for small businesses very clearly.  They want small businesses to be a top priority for the next Parliament. As a Liberal Democrat I am up for that, and I’m convinced that this country’s future growth and prosperity depends on flourishing SMEs.  For me the top ‘asks’ are those aimed at getting the banks to do the job they were set up for.”

Small firms particularly want to see action by the next Government on late payments, which remains a growing problem, with £46bn now owed to businesses.  They also want a fundamental reform to Business Rates.  Sir Andrew attended to speak to his area’s FSB representatives and discuss local priorities and why small firms matter in Stockport.

“I was delighted to see Sir Andrew on Monday night, taking part in our #ibacksmallbusiness campaign and meeting local FSB members.  Over the next six months, MPs of all parties and candidates from across the political spectrum need to think about how to support small firms in their area.  Only this way will we safeguard the recovery and create new economic growth.”

“It is great to see FSB challenging politicians on key small business issues.  I’m proud to have attended the launch on behalf of small firms in my constituency, and to back the campaign.”

Full details of the campaign, including the Business Manifesto, local information and calls to action are now live at www.ibacksmallbusiness.com.